You’re fitting four people and their stuff in a WHAT?

Yes, this is the plan: Mom, Dad, Matt and I are going to attempt to fit ourselves and all of the stuff we need for 11 days on the road — including camping and cooking gear — into my Toyota Prius. And at night, Mom and Dad are actually going to sleep in the car while Matt and I camp in hammocks with tarps.

When we first started planning the trip, this idea seemed unremarkable to me, but the reactions I got when I mentioned it to friends and coworkers suggested otherwise. Some even laughed, assuming I was just joking. I got a lot of questions about how big my family members are, as if I might reveal they’re all midgets and suddenly the plan might seem slightly less crazy. But the way I see it, if anyone can do it, we can– Matt and I just got back from living for four days with the gear we could carry on our backs, Dad once won free concert tickets for squeezing himself into a clown car, and we are all just a bit of the particular kind of crazy that sees the puzzle of packing and arranging the mountain of gear to fill every nook and cranny as an irresistible challenge.

In many ways, a Prius is a perfect roadtripmobile. There’s the gas mileage, first and foremost. I’m averaging between 45 and 50 mpg. For 3,000 miles at $3.50 a gallon, that’s less than $250 in gas for the entire trip — one of the main factors that convinced us we could afford to do this. We decided to keep expenses to an absolute bare minimum by buying groceries and cooking our meals instead of stopping at restaurants, and by staying at campgrounds, which I find more enjoyable than motels and would probably choose even if the price were the same. And that’s where the second great advantage of the Prius comes into play: When the back seats fold down, it creates a flat bed plenty long enough for sleeping. And because it has a hatchback instead of a trunk, if you pile to the ceiling, you can pack a surprising amount of stuff in the trunk area. 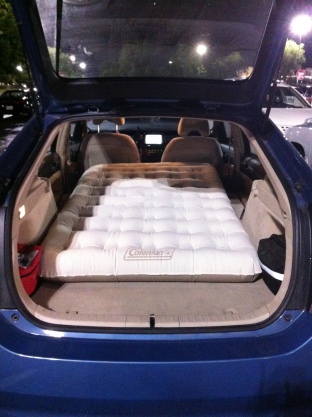 Here’s what the back looks like with the air mattress in it. It’s the size of a twin bed, so it will be cozy for two, but not impossible. Note that there’s also room on either side of the mattress in the back seat area.

So I began planning. The first order of business was to purchase an SUV air mattress for mom and dad to use in the back and to read up on the options for building up the area between the end of the folded-down back seats and the back of the front seats so you can scoot your mattress as far forward in the car as possible. Some Prius owners have constructed hinged platforms for bridging this gap but I much preferred the solution suggested by others: Pack your belongings in plastic bins about 20 inches high and sit them in the gaps to create the extended sleeping area. Mom and Dad have a wide variety of bins at home, so they measured them all and we debated by email which combination of sizes would be best to fill the space. We decided on two big red bins — one of which would hold all of our wedding clothes and the other would hold kitchen gear — with two shallower plastic containers on top of each to build up the height to the full 20 inches. 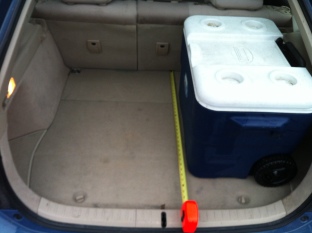 Based on the measurements, it was my theory that we would be able to fit my big cooler on one side of the trunk area and two big bins beside it, then squish soft stuff in all around them and pile everything else on top.

When my parents got here tonight, we tried putting the bins beside the cooler and the outside bin hung several inches outside of the trunk. We twisted and turned them, trying one bin upside down, to no avail. Fortunately, we had a plan B, using four smaller bins. That created a new problem with what to do with all the wedding clothes and shoes, which we wanted to keep separate from the clothes and gear we will have been camping in for a week when the wedding day rolls around. For an hour or two, we were stumped, but in the middle of Matt’s softball game, it came to me: There is a secret compartment under the floor of the trunk but above the spare tire. I opened it up and found a snow shovel, squeegie stick and windshield cover inside. We got rid of them and — voila — a safe, protected space the size of a large suitcase just perfect for fitting the clothes and shoes for all four of us, safely sandwiched between trash bags to protect it.

Wish I had taken a photo before any of it was in bins!

Next, we gathered all of the group gear we needed to pack and piled it on the living room floor. When we were finished, the mountain of tarps and sleeping bags and pots and pans and mattresses and pillows spread across the entire room. It seemed ridiculous. But we began packing it into bins, and slowly but surely, it began to look ALMOST possible. 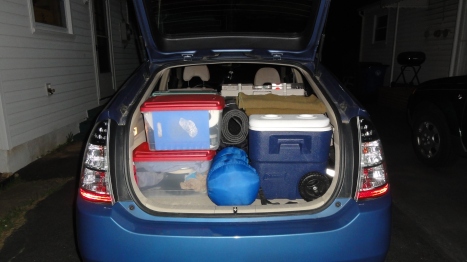 Amazing! But wait, what about our clothes…

In the end, we got everything in with a few inches of space to spare… but decided to leave for morning the task of squeezing in the duffel bags of clothes we each packed. Pillows and camp chairs are looking unlikely, but we’re not willing to rule them out yet — Matt thinks we can use a bike rack to cary the chairs and pillows can always be held on laps. A few of the comments as we pondered the remaining work: Dad: “We’ll just have everyone get in and we’ll hand them things and stuff it in until there’s only room left for the driver.” Matt: “I’ll ride on the roof.”

Will we succeed? Will we suffocate? Will we abandon half our stuff on I-70 after the first few hours? Stay tuned tomorrow to find out…

Route to our Roots (Or, My Crazy Idea for a Family Road Trip) 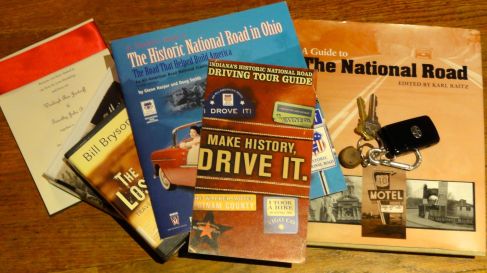 To know America, one has to understand how people have built their lives around the road, the access it provides and the activities it stimulates….The best place to search for the archetypal road that will illustrate how life becomes landscape is an old road — not a simple track, abandoned and backwatered, but a road with purpose, a road built in the context of nation building, a road that would become a key part of the national highway network. That road is the National Road.

-Karl Raitz, A Guide to the National Road

This is how the author of my National Road guidebook introduces the allure of traveling the Chesapeake-to-Mississippi route that became US 40, but for me, this route represents a key not only to knowing America, but to knowing myself.

When people ask, “Where are you from?” I often stumble a beat as the possible answers flash through my mind: Denver, Colorado, where I was born? St. Louis, Missouri, where I spent most of my childhood? Ellicott City, Maryland, where I came of age? Hagerstown, Maryland, where I first lived on my own after college? Frederick, Maryland, where I live now? I feel a connection to each one of these places, but there is a thread that runs through all of them: US 40.

Yet despite living within a few miles of US 40 in nearly every place I have ever called home, these individual sections have never felt connected in my mind. Traveling between them today, you hop on the Interstate, a sort of magic portal, and hop off somewhere else, transported. But this is not the only way: If you’re willing to drive a little slower, to mosey through downtowns and stop lights, to wind around twists and turns that were unsuited for the path of a freeway, you can still travel much of the route of the old National Road.

So when my family received an invitation a few months ago to attend my cousin’s wedding in Kansas and we began talking about incorporating the wedding into a road trip that would include returning to St. Louis and Denver as a family for the first time since moving away 20 years ago, I threw out what I knew could be a controversial idea: To take what would already be 50 hours worth of driving and draw it out even longer by following, as closely as we can, the route of US 40 and its predecessors wherever they diverge from I-70.

Whether or not we stick to that resolution, I know the experience of tracing the ribbon of my life back to the place of my birth will be an unforgettable experience, and I invite you to follow along with me here as I blog about our adventures in Prius camping, visiting quirky roadside landmarks, returning with my mother to her childhood home and more.

In my 27 years, I've lived many places I could consider my "hometown," but the one thing they (nearly) all have in common is a road: US 40. On June 15, my parents, brother and I will pile in a Prius to travel that road a total of more than 3,000 miles as we revisit the settings of long-faded memories while reading about the history of this fascinating east-west route. Read more about the idea here.